Since year 1996, the reverend of the Bethel’s Congregation of EELC in Tallinn has been Avo Üprus who brought with him a vision of the social church, according to which a socially sensitive, open and active church must become an integrator and healer of its community. Healing and empowering the society is possible only when answering the needs of the people. The moral theology says that it is right to start with those who need our help the most.

In April 1997, members of the Bethel’s Congregation met a wandering band of 9 children at night in the Northern Tallinn, at the street of Kopli Lines. The children were dirty, in soiled clothes and very frightened.

We tried to start a conversation with them, but they ran away. One boy remained and we asked him what they were doing alone on the street at night and whether they need something to eat. After a little consulting, we got a reply that they are very hungry and that they would be very glad to get food. Fortunately there was a food store open around the clock in the city, so we needed two trips there that night, because the food we bought disappeared fast. Leaving afterwards, we thought that the good deed was done and that this was to be our last trip into the district famous for crime, drug addicts and homeless people. Only the next day did we start thinking that these children are also hungry on that day and will be hungry on the day after. That same evening we went back, and since then members of the congregation went to the Kopli Lines every week, bringing along food packs, warm clothes, blankets and pillows for the children. The children were of age 5-15 years; they didn’t attend school and were living in an empty apartment of an abandoned building without even elementary living conditions (food, electricity, water supply and toilet room). The children had parents, but they were living separately from children and in similar conditions. 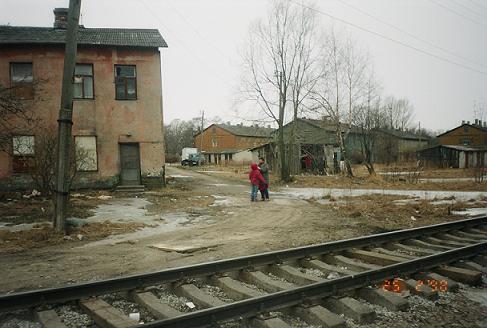 One day the children asked us: "But you are from a church. Why don’t you ever invite us there?"

Into the dark and cold Bethel’s with its windows closed with masonry, one stream of cold water in a sink and drainage system leaking into the basement? We had nothing to do there and our joint activities continued in the open air.

In the summer of that same year, the Bethel’s Church initiated a project to help these children; the project was called "We Exist" and it was financed by the Ministry of Social Affairs together with the Bethel’s Congregation. In September 1997, Reverend Avo Üprus of the congregation made a suggestion to take into use the abandoned apartment located on the second storey of the church and originally intended for a reverend, and to renovate some rooms so that we could invite the children to a warm place during winter. 5-6 men came together, three of them being friends of congregation members, one being an unemployed man from the neighbourhood of the church and two having been released from prison. These men did a good work with their hands and hearts, and in four months the kitchen and three rooms were fully renovated. This entire undertaking was realised solely with the support of private donators and organisations.

As a result of these four months of construction works, the day care centre for street children opened its doors on December 23, 1997. The Assessor of the EELC at the time and the Arch Bishop today, Andres Põder gave a blessing to this initiative and its results.

We had gained trusting relationships with more than 20 children. The day care centre was open 4-5 days a week and provided them with warm meals, clean clothes and medications. By day the children had the opportunity to be in a warm room, but by night we went home and they went back to the Kopli Lines. The beginning was difficult – we were lacking food, a shower room and a washing machine. But good angels sent us friends who came in and asked if we needed help. We tried to take the children from the city to countryside for the summer, but our financial means for that were very sparse. At Saaremaa we found good-natured people who agreed to give us the use of the Tumala Mansion, as the building was standing empty. The first summer camp of more than 30 days proved to be a difficult test – it was full of surprises and disappointments, joy and anger, trust and betrayal and many-many things to discover and learn. We learned to understand, forgive and love – both the children and the adults. 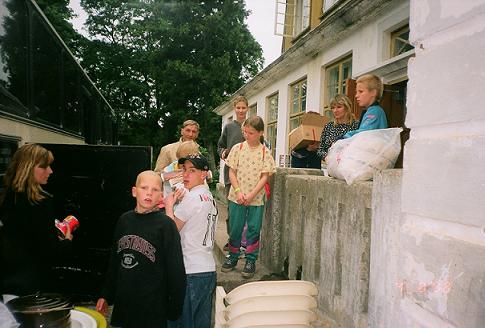 In September, no-one wanted to go back to the streets. While at Saaremaa the evening procedure of washing hands and feet was a matter of trouble, now everybody wanted to sleep between white sheets.

Having experienced love and caring, the children became frightened of returning to the streets. They needed to be protected and cared for, like all children. They needed a home.

In October of the same year, with help from friends, we managed to renovate the shower room and the toilet room. Both children and adults were glad for this and our work became easier as well.

As a result of two years of work, very trusting relationships had developed between the children and the congregation members; we had become good friends. But still, most of the children didn't attend school.

In December 1998, the board of the congregation decided to offer the rooms of the day care centre as living space for those children who were ready to attend school. In January 1999, two girls agreed to go to school if they can stay in the church at nights. A couple of boys came after a couple of weeks and by the end of year 1999 there were 12 children living in the church. As there weren’t enough bedrooms, we built bedrooms, shower rooms and two toilet rooms on the choir gallery of the church. 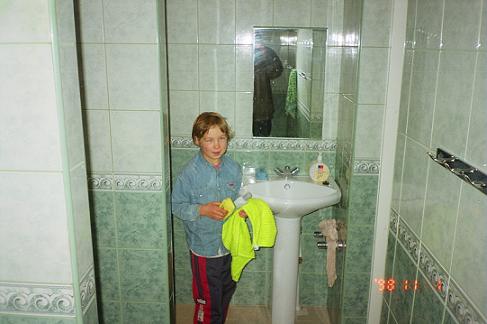 The first and foremost was the requirement of attending school. The children were also required to quit smoking, glue-vapour inhaling, use of narcotic substances, alcohol. It was forbidden to fight and to swear. They were required to come straight home after school and be home at around eight o’clock in the evening. This was a difficult choice for children who had been living on the street for years, following only those rules that they made for themselves. Twelve children decided to try.

During years 1998-2001, 4-6 older street boys were living in the basement of the church. They had been living on the streets for longer than other children and so they found it much more difficult to follow rules. But they, too, needed help – the boys had nowhere to sleep at nights and so we allowed them to sleep in the basement of the church. The basement had some old metal beds and mattresses that they could use. These were very bad conditions, but it was still better than wandering on streets at night with a gang. It was humid and dark in the basement and there was water sloshing on the floor as it seeped there because of the lack of land drainage.

Every day the day care centre was open, 10-15 children came to the church, but in the existing conditions it was very difficult to help them and the board of the congregation decided to establish a day care centre and shelter for street children on the basement storey of the church. With the help of donations from our friends and supporters, the renovations were started in year 1999 and as the first stage the entire sewer and land drainage system around the church was rebuilt. 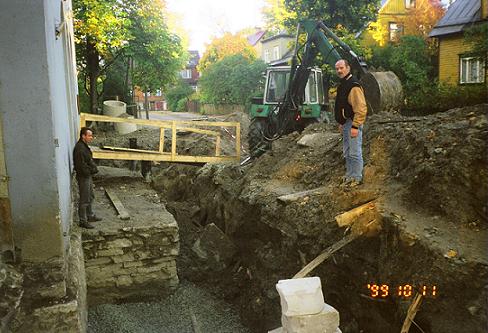 All other rooms of the church were in a terrible state as well – walls were painted with dark green oil paint, the heating system was mostly not working and the entire building had very high humidity levels.

The church hall and the stairwells were also badly in need of renovation. The older boys of the day care centre helped actively with the restoration works of the Bethel’s Church: they broke open the masonry covering the windows of the church and during two years they removed ca 400 m² of old oil paint from walls with scrapers.

In year 1999, the older boys of the day care centre started to demolish the old concrete floor and the partition walls that had been built there. Over the course of this, the boys carried out 230 m³ of construction waste from the basement. All this work was physically very hard and tiring. Still they wanted to do it and this changed much of their world view. For their work they could live in the church, they got warm meals and clothes. Step-by-step they started to realise that they could also cope in life without theft and lies. As Avo Üprus has said: these boys are building the church both as a building and as something inside them. They also built a home for themselves and for other children, but they didn't know it yet and neither did we clearly at the time. 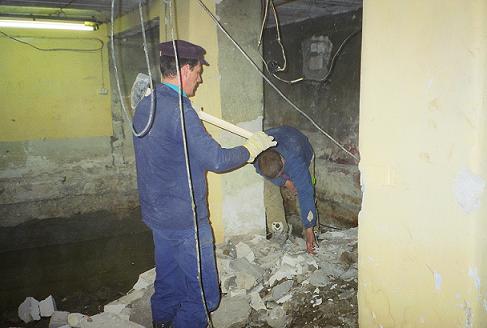 In July 2000, we signed a contract with a construction company for renovation works of the entire basement storey. The initial budget for the construction works was 1.8 million EEK, but the bank account opened for this purpose had just 250,000 EEK of the entire necessary sum. We let our co-operation partners know about the project and they promised to support us. Besides that, good angels sent more people to Bethel’s who offered their help. Donations came from 12 different countries and in 10 months the renovations were complete. The day care centre and shelter were opened on April 1, 2001 and this time Bishop Einar Soone gave a blessing to this work in the name of the EELC. On that day, at the service of giving thanks, Bible was read in eight different languages in the Bethel’s Church.

The renovation of the basement cost a total of 2.79 million EEK; together with replacing the sewer and land drainage system it amounted to 3.1 million EEK. By the time of the opening, the entire sum was paid.

The first children came to live in the shelter in May 2001. The basement storey of the Bethel’s Church has 430 m² of floor space. The day care centre has 6 showers and a sauna, a washing machine and a dryer, a kitchen of modern standards and a large dining hall. The children also have a separate classroom where they do their school homework and engage in creative therapy.

Since year 1997 until today, the main part of the operating costs of the Bethel’s Centre of Pastoral Care have been covered with donations from private persons, congregations and various organisations from Norway, Sweden, Finland, Denmark, Switzerland, Netherlands, Russia, Germany, USA and Estonia.

During the period of spring 2000 to the end of year 2004, we received monetary aid from the Tallinn Social Welfare and Health Care Board for our operating costs, as this institution bought the service of children’s home from the Bethel’s Centre of Pastoral Care.

During the years, we have also written projects for various activities. Via project financing, our activities have been supported by the Tallinn Social Welfare and Health Care Board, the Ministry of Social Affairs, the Tallinn Youth Board, the Nordic Council of Ministers, etc.

In years 2003-2004, the project "Camp Saaremaa" was started. Children spend their summers and holidays at Saaremaa, and this means not only resting. Children like to work: hacking bushes, making firewood with their OWN hands.

We thank God for the love, the mercy, the friends and the children who have found a home in the Bethel’s Church!